Feb 2, 2022
Causes of Conflict
The main causes leading to conflict in organisations are as follows:
1) Organisational Change: People hold differing views over the direction to go, the routes to take and their likely success, the resources to be used, and the probable outcomes. With the pace of technology, political, and social change increasing and the marketplace hurtling toward a global economy, organisational changes will be ever-present.
2) Personality Clashes: The concept of individual differences is fundamental to organisational behaviour. Not everyone thinks feels, looks, or acts alike. Although personality dissimilarities can cause conflict, they are also a rich resource for resourceful problem-solving. Employees need to respect, accept, and understand how to use these differences when they arise.
3) Different Sets of Values: People also hold different beliefs and adhere to different value systems. Their principles may diverge, or their moral values may lead them on different paths. The resulting conflicts can be difficult to resolve since they are less ideal than disagreements over alternative inventory, product levels or promotional campaigns.
4) Threats to Status: The status, or the social rank of a person in a group, is very important to many individuals. When one’s status is threatened, face-saving becomes a powerful driving force as a person struggles to maintain the desired image. Conflict may arise between the defensive individual and whoever created a threat to status.
5) Contrasting Perceptions: People perceive things differently as a result of their prior experiences and expectations Since their perceptions are very real to them (and they feel that these perceptions must be equally apparent to others), they sometimes fail to realise that others may hold contrasting perceptions or the same object or event. Conflict may arise unless employees learn to do things as others see them and help others do the same.
6) Lack of Trust: Every continuing relationship requires some degree of trust and the capacity to depend on each other’s words and actions. Trust opens up boundaries, provides opportunities in which to act, and enriches the entire social fabric of an organisation. It takes time to create, but it can be destroyed in a moment. When someone has a true or perceived reason not to trust another, the possibility for conflict rises.
7) Interdepartmental Wrangles: Interdepartmental and inter-group wrangles are overwhelmingly concerned with:

i) Territory- where one group feel that another is treading in an area that is legitimately theirs.

ii) Prestige – one group feels that another is gaining recognition for efforts and successes that are legitimately theirs.
iii) Poaching and theft – where one group attracts away the staff of the other.
8) Job-Related Issues: Conflict with the job held also occurs. This comes in the following forms:
i) Conflicts between Job and Job-Holder: This is largely related in the cases of expert and professional staff, to frustration in terms of the ability to use expertise to the full: the lack of scope for professional advancement and development.
ii) Conflict between Job and Organisation: This concerns the relationship that exists between the two; the availability of opportunities, and the extent to which these are offered.
iii) Conflict between Job-Holder and Organisation: This is the extent to which pay, supervision, management style, and the work environment are suitable and effective.
9) Other Agendas: Hidden, secondary, and paralleled agendas cause conflict. These proliferate where overall aims are not well or lightly drawn; where they do not or are not able to accommodate those of the individuals involved and where people feel that, even if they do well with the work, receive due recognition. 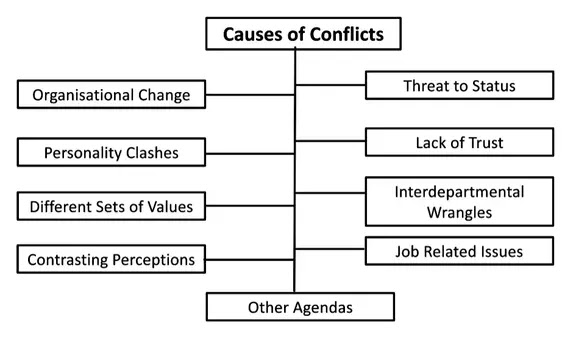 Stages of Conflict
Stages of conflict include various steps as shown in the figure:
1) Latent Conflict (Stage 1): When two or more parties need one another to achieve the desired objectives, there is potential for conflict. Other antecedents of conflict such as individual goals, interdependence, and ambiguity of responsibility do not automatically create conflicts. Latent conflict usually arises when a change occurs. Conflict can be caused by a change in organisational direction, a change in personal goals the assignment of a new project to an already overloaded team or an unexpected occurrence such as promised salary increase that does not happen.
2) Perceived Conflict (Stage 2): This is the point at which team members become aware of the problem. Incompatibility of needs is perceived, and tension begins. because the concerned parties begin to worry about what will happen. At this point, however, the concerned parties do not feel that anything they care about is actually being overtly threatened.
3) Felt Conflict (Stage 3): At this stage, parties become emotionally involved and begin to focus on differences of opinions and opposing interests – highlighting perceived conflict. Internal tensions and frustrations begin to crystalline around specific, defined issues, and people begin to build an emotional commitment to their position. The types of emotions encountered are important because negative emotions create low trust and negative perceptions of the other party’s situation. Positive feelings can contribute to a balanced view of the situation and to collaborative endeavours.
4) Manifest Conflict (Stage 4): The obvious display of conflict occurs when the opposing parties plan and act accordingly to achieve their own objectives and frustrate the other’s objectives. Actions can range from minor disagreements, questioning, and challenges at one end of the conflict-intensity continuum to verbal attacks, threats, ultimatums, physical attacks, and even efforts to destroy the other party at the other end.
5) Conflict Outcome (Stage 5): The interactions of the conflicting parties in the manifest-conflict stage result in outcomes that can be functional or dysfunctional for one or both parties. As conflict proceeds through these stages, a functional resolution becomes difficult. The concerned parties become certain about their positions and are convinced that the conflict is a win-lose situation. It is easier to achieve positive collaboration and win-win outcomes when the conflict is recognised early, before frustration and other negative sentiments set in.
Effects of Conflict

The conflict has both positive and negative effects. It can be positive when it encourages creativity, the clarification of points of view, new looks at old conditions and the development of human capabilities to handle interpersonal differences.

All of us have experienced a surge of creativity when permitting the ideas of others to trigger our imagination, e.g, in a brainstorming session. Conflict can be negative when it creates resistance to change, establishes turmoil in an organisation or interpersonal relations fosters distrust, builds a feeling of defeat, or widens the chasm of misunderstanding.
Positive Effects of Conflict

The positive effects of conflict are as follows:

1) Acts as a Motivating Factor: Motivate individuals to do better and to work harder. One’s abilities and talents come to the forefront in conflict circumstances.

2) Acts as Need Satisfier: Satisfy certain psychological needs like dominance, aggression, esteem, and ego and thereby provide an opportunity for the constructive use and release of aggressive urges.

3) Provide Creative and Innovative Ideas: It provides creative and innovative ideas. For example, employee benefits of the present day are an outcome of the union-management conflicts over the past decades.

5) Create Understandings: Facilitate an understanding of the problem, people, and interrelationships between people, better coordination among individuals and departments, in addition to strengthening intragroup relationships, etc.
Negative Effects of Conflict

The negative effects of conflict are as follows:

1) Isabordination: A company with weak management develops problems with conflict that continue for the long term. Employees see that management is not able to resolve conflicts within the organisation and respect for the authority of management can be eroded. Insubordination originates because employees don’t think that management can keep control over the company.

2) Drop in Productivity: Letting a conflict continue means that employees’ attention becomes more focused on the conflict and not on the productivity of their work. As a problem is allowed to linger, employees will attach more importance to resolving the issue in their favour rather than attending to worker productivity.

3) Lack of Direction: Conflict can sometimes arise when management is unable to express & communicate the focus of the company to employees. Conflict will erupt as employees are allowed to interpret change within the company in their way.

4) Fragmentation: Conflict creates rival factions, Sometimes those factions are people, sometimes they are groups. Unresolved conflict can create tension between groups that may generally need to work together. Such rivalries can make the progress of the company difficult.

5) Lack of New Ideas: Groups in conflict tend not to collaborate on new ideas. When conflict goes unresolved it can create difficulties in generating new ideas for the project, the company needs to solve problems it is facing for better results.

6) Affects Quality of Work: If a conflict is allowed to go on long enough, the parties involved may begin to show more interest in the conflict than in doing their jobs properly. Product quality can suffer and in some cases, the safety of the employees can be in jeopardy as well.

You May Also Like:-
1. Marketing Environment
2. MARKETING MIX
3. MARKETING MANAGEMENT
4. BRANDING
5. RECRUITMENT
6. MANAGEMENT DEVELOPMENT
7. PROMOTION
8. 360 Degree Performance Appraisal
9. Importance of Organisational Behaviour
Features of Conflict
Features of conflict are as follows:
1) Conflicts are Natural: Conflicts are a natural and inevitable result when individuals work together, sharing diverse thoughts, concerns, perspectives, and goals. A manager has to deal with conflict situations both as a mediator (to help resolve conflicts between others) and as a participant.
2) Conflicts are not Big: Conflicts are not big, emotional blow-outs or scenes of physical violence, although these can and do occur, especially in workplaces in which conflict is not managed well. Conflicts usually involve small matters that continuously grind down working relationships.
3) Conflict is Multidimensional: The concept of conflict is multidimensional; it envelops a family of forms. It is a clash of powers. However, conflict is not a balance, equilibrium, of powers. It is not a stable resultant
4) Conflict is Finding the Balance: Conflict is the pushing and pulling, the giving and taking, the process of finding the balance between powers. Therefore, conflict is correlative to power. Power is the ability to produce effects; conflict is the process of powers meeting & balancing. Order to understand which powers succeed requires comprehending their conflicts; to understand conflict involves untangling the powers involved.
5) Conflict is Universal: Conflict is universal. Knowledge about self, others, and reality, growth and development, and the increasing ability to create an individual’s own heaven or hell, comes through conflict.
6) Conflict is Disruptive: In a business organisation, conflict may be described as a breakdown or disruption in normal activities in such a way that the individuals or group concerned experience difficulty in working together. If employees fail to work together but openly feud, the work of the business organisation will be severely disrupted,
7) Conflict Involves Disagreement: Generally, there is an awareness that there is some level of disagreement between the two (or more) parties involved in the conflict. Disagreement can be related to the following issues:
i) Facts: Sometimes, the disagreement occurs because individuals who have different definitions of a problem are not fully aware of the relevant information, accept or reject different information as factual or have different impressions of their individual power and authority.
ii) Goals: Sometimes, the disagreement may be about what should be accomplished the desirable objectives of a department, division, section or a specific position within the organisation.
iii) Methods: Sometimes, individuals differ about the procedures, strategies or tactics which would most likely achieve a mutually desired goal.
iv) Values: Sometimes, the disagreement is over ethics, the way power should be exercised or moral considerations or assumptions about justice, fairness and so on. Such differences may affect the choice of either strategies or goals.