Components and Functions of Attitude 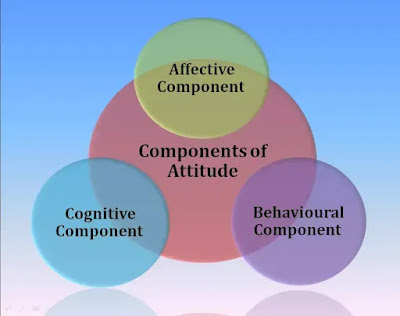 1) Cognitive Component
The cognitive component of an attitude is conceptualised as a person’s factual knowledge of the situation, object, or person, including oneself. In other words, the cognitive component leads to how much somebody knows about a topic.
For example, The cognitive component of computer concern would be based on how much a person knows about computers and his level of understanding of computer work.
2) Affective Component
The affective component of attitude consists of a person’s evaluation, liking, or emotional response to some object, situation, or person. Affective responses reflect one’s attitude with sensations of happiness, sadness, or other levels of physical arousal.
For example, For the attitude construct of laptop anxiety, a topic of current interest, the affective component would be a personal liking for the laptop and his feeling of excitement, or fear, when he used one.
3) Behavioural Component
The behavioural component of an attitude involves the person’s clear behaviour directed towards an object, situation, or person.
For example, The behavioural component of computer concern would be related to how often a person had used a computer, and what kind of experience he had faced.
For example, People, who routinely use machines, especially if they choose to use them freely, would be more likely to have positive attitudes toward machines, and be less anxious, than would others who have less experience with machines.
The components are not isolated but are interrelated and produce a representation of the attitude construct. organising framework or mental
Functions of Attitude
According to Katz, the functions of attitude fall into the following categories:
1) Adaptive Function
Some attitudes assist to enable oneself to attain particular, desired goals or avoid unwanted situations. The holding and representing of certain attitudes may bring about direct rewards.
Alternately, some attitudes allow a person to access circumstances where rewards are available, as when expressing a liking for particular music or ways of dressing allows some adolescents to join appropriate social groups and receive the advantages of group membership (social support, friendship, and so on). Moreover, expressing other attitudes may help some people avoid negative situations.
For example: In an election, generally the people from the minority cast vote for those candidates who promise to keep reservations.
While the people general cast votes for those who promise to remove the reservation system. Thus the voting behaviour of both the groups is influenced by the utility and interest served.
2) Knowledge Function
Some attitudes are beneficial as they help us to understand the world more clearly. They help people ascribe causes to events and direct attention towards features of people or situations that are likely to help make sense of them. As a result, they help to make the world more understandable, anticipated and obvious, as well as increase the efficiency of knowledge processing (cognitive economy).
For example – Stereotyping. Stereotypes are mental structures that allow us to predict the features a person will have based on the group they belong to.
For example – Somebody who has an interest in hi-fi systems is likely to read magazines about them, visit exhibitions, and discuss them with friends to know what the latest products are. 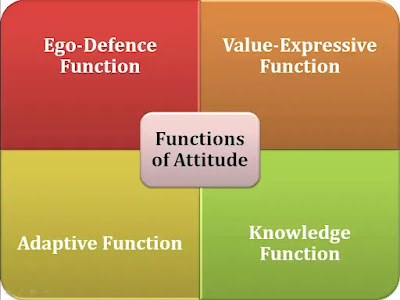 3) Value-Expressive Function
Some attitudes are essential to a person because they express values that are basic to that person’s self-concept (ie, their ideas about who they are). Consequently, attitude is a part of who they are and the expression of attitude says important points about the person to others.
For example- A deeply religious person will feel that his identity is being actualised if he holds political views that reflect her religiosity, such as support for prayer in school.
Attitudes that serve a value-expressive function, are not very likely to change because they are grounded in an individual’s concept of self. Attitude change will come about if a person’s self-concept changes.
4) Ego-Defence Function
This attitude function protects people from accepting the bitter and real truth about themselves. It helps a person during his emotional conflict situations. The ego defence function is also used to define the ego and self-respect of a person.
Thus, this function includes different defence mechanisms (rationalization, denial, repression etc) used by an individual to protect himself from psychological harm. Generally, the ego defensive function is used by an individual when he is frustrated and wants to satisfy his ego.
For example– One way children might defend themselves against the feelings of humiliation they have experienced in P.T. lessons is to adopt a strongly negative attitude toward  all sports. People whose pride has suffered allowing a defeat in sport might similarly adopt a defensive attitude. This function has psychiatric overtones.
Positive attitudes towards ourselves, have a protective function (ie an ego-defensive role) in helping us reserve our self-image.