Nov 1, 2021
Delegation of Authority
Delegation of Authority Meaning
Delegation of Authority: Delegation of authority means giving authority to another person, to perform a particular task. Delegation is a process of sharing work and authority between a manager and subordinates. Delegation is an important process to manage the activities of an organisation thoroughly.
Delegation means passing on to others a share in the four elements of the management process, that says, in the command of the activities of other people and in the responsibility for the decision that determines the planning, coordination and control of the activities of such other people.
Delegation of Authority Definition
According to E.F.L. Brech, “Delegation means the passing on to others of a share in the four elements of the management process; that is to say, in the command of the activities of other people and in the responsibility for the decision that will determine the planning, coordination and control of the activities such other people”.
According to O’Donnell and Koontz, “The whole process of delegation involves the determination of reach expected, the assignment of tasks, the delegation of authority for the accomplishment of these tasks, and the exaction of responsibility for their achievement”.
Delegation helps in finishing the work in time, reduces the workload of managers, and motivates and develops coworkers. It is a process that allows an individual to distribute work to other people and empower them all with fair authority to do their work.
Need of Delegation
The need for delegation has been discussed below:
1) Reduces Work Load to Managers: Delegation of authority allows a manager to share his workload with his subordinates. Bypassing on some of his own work to the subordinates, the manager can focus on more important aspects of his work.
2) Basis of Superior-Subordinate Relations: Delegation of authority is the process by which superior-subordinate relations among managers are established. The flow of authority from the top-level management to lower levels is directed and controlled by the method of delegation.
3) Improves Managerial Effectiveness: The manager who delegates authority can perform much more than the one who does not. This is because the manager who delegates can get some work done by his subordinates and can focus on major matters that need his attention, can take relevant decisions and act accordingly.
4) Motivates Subordinates: Delegation of authority refers to the division of authority among the employees in an organisation along with the responsibility. As a result, apart from getting some freedom employees do feel that they are important. They feel motivated towards their work for better performance. They are also likely to use their skills and abilities truly to get their work done properly.
5) Develops Managers: Managers are responsible for the delegation of authority in the organisation as a source of development, and training for the employees. It opens up opportunities for managers to acquire leadership moreover other skills and competence. They are expected to use their authority, handle circumstances and solve managerial problems. They are also expected to get things done by their employees, by guiding and motivating them.
6) Facilitates Organisational Growth: Delegation of authority at all levels of management encourages the growth and development of the organisation. This is because the division of work implicit in delegation helps the company to formulate more managerial tasks for assuming additional workload of development and growth. New units and departments can be created and managers can be appointed who will have delegated authority to regulate them. 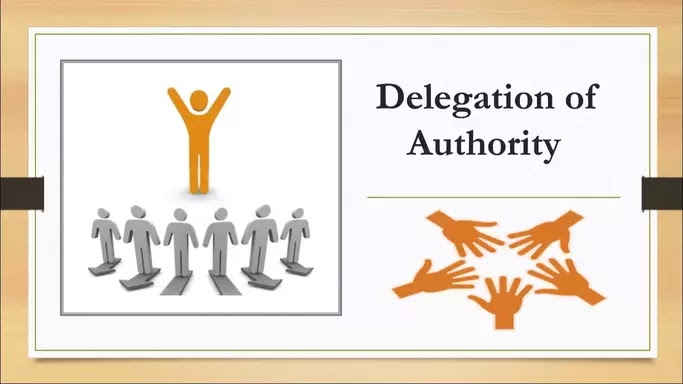