Sep 15, 2021
New Economic Policy 1991
The New Economic Policy of India was established in the year 1991 under the supervision of P. V. Narasimha Rao. After the achievement of independence, it was realized that for the accomplishment of growth and a self-productive economy in a few decades, which other countries have achieved over the centuries, it is essential to formulate a strategy for economic development. To achieve this goal, the era of industrialization has started on a large scale in our country, for which proper technology, socio-economic policy, freedom of planning and development programs were started.
Therefore, the role of the public sector was considered necessary. While supporting the liberal policy of trade, India considered the mixed economy, public sector and socialist way of society as a panacea for all economic evils. Simultaneously, economic planning was started to rebuild the economy.
In short, we can say that the five decades of economic planning have seen a mixed form of defeat and success. It was felt that despite great progress in many areas all was not well in terms of the development of the public sector. There was an overload of controls in the sphere of the private sector.
The situation of foreign exchange reserves to provide finance for imports was also not good. Non-residents of India accounts were being withdrawn and new credit facilities were not available. Inflation was taking a terrible form and industrial growth was decelerating.
The first injury to the U.S.S.R. (U.S.S.R.). The euphoria of socialism was changing in favour of a ‘free market economy. Thus, taking into account many factors, such as a considerable fall in exchange rates, a deficit in the balance of payments, rapidly increasing inflationary trend, continuous increase in the deficit finance system, and widespread political instability, have made everyone adopt the policy of new economic reforms. inspired to build.
To free the economy from the clasps of crises and to bring it on the way to rapid development, the Indian government made significant changes in its policy related to trade, foreign investment, industry, exchange rate, fiscal matters, etc. If the varied components are taken together, then such an economic policy is formed which says goodbye to the first policy.
Since July 1991, when the rupee depreciated, the  Indian government has announced many new policies in the form of ‘New Economic Reforms’. Although these economic reforms are related to different sectors of the economy, they all share a common sense of prosperity of the economy.
Meaning of New Economic Policy 1991
According to C. Rangarajan, “The New Economic Policy includes diverse policy measures and changes introduced from the year 1991”. All these measures have the same spirit. The purpose is simple and it is to improve the efficiency of the mechanism involving multiple controls, reduce competition in the private sector and improve the scattered capacity.
The new economic policy tried to bring a more competitive environment to the economy so that the efficiency and productivity of the system should be improved. Therefore, to achieve the goals of the new economic policy, necessary reforms were made in trade policy, industrial policy, monetary policy and fiscal policy.
Phases of Economic Reforms
(i) First Phase (1985-90)
The process of privatization was formed in the government of Mr Morarji Desai and started during the government of Mrs Indira Gandhi and continued till the government of Mrs Indira Gandhi. But this process achieved speed during the control of Shri Rajiv Gandhi.
Shri Rajiv Gandhi drafted new trends in the economic policy of the government. It suggested that the incorporation of modern techniques, productivity improvement, and complete utilization of potential must necessarily get the status of a national campaign.
The new economic policy focused more on the role of the private sector. Shri Rajiv Gandhi clearly said, “The public sector has extended in many directions where it should not have spread. We will develop our public sector to do what the private sector is unable to do. But we would like to expand the private sector more so that through its expansion the economy can progress more freely”.
To encourage the private sector, many changes were made in the policy, which is related to the following matters – export-import policy, technological advancement, fiscal policy, industrial license,  abolition of controls,  and restrictions, capital of foreign share, fiscal and administrative rationalizing and simplifying the system of regulation.
All these changes were aimed toward the private sector deserted environment so that investment in the private sector would increase on a large scale, which would modernize the economy and lead to rapid growth.
KN Raj rightly summed up the goal of economic policy, Although there is general agreement that a special feature of these policy changes was the tightening of monetary policy by raising interest rates, Rs. The exchange rate of K was coordinated by 22 per cent and major liberalization and simplification of trade policy were announced.
More focus was on increasing the efficiency and effectiveness of international competition &  industrial production so that foreign technology  & investment can be used in greater quantity than ever before, which will enhance the performance of the public sector and rationalize its reform, possibilities,  and modernization of the financial sector. It would have been able to meet the needs of the economy more effectively and efficiently.
Similarly, the New Economic Policy introduced the disposal of unnecessary restrictions in the issuance of licenses and MRTP. Focused on not providing industrial licenses to companies. It should try to coordinate production with governed values.

(ix) It is felt that the new economic policy will not be able to check the rising trend of prices, and will also not be successful in controlling financial aid, reducing the fiscal deficit, and preventing other evils. 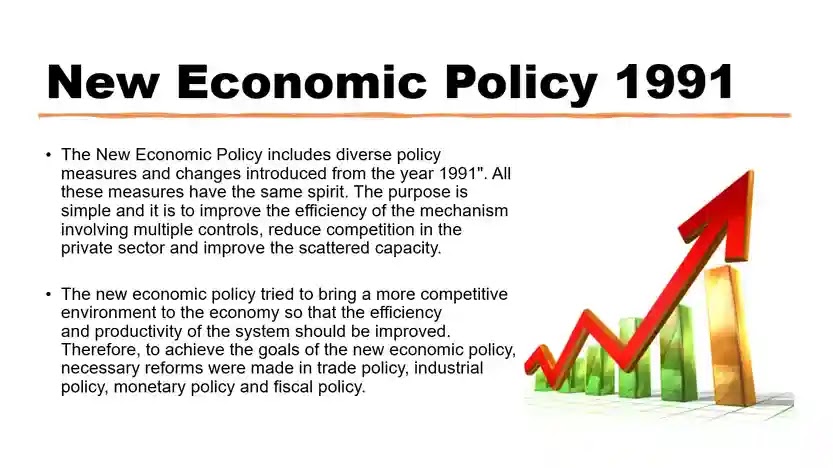