The nature of politics can be described as follows:
1) Uses Some Sort of Power: Organisational politics involves some sort of power either directly or indirectly. Organisational politics can be employed by those who are in official positions and enjoy authority in the organisation. It can also be influenced by other people close to those who hold formal authority.
2) Self-Serving: Organisational politics involves self-serving behaviour. It suggests that either organisational resource is used for personal welfare or other benefits are given to another person. In both cases, the decision is not rational from the organisation’s point of view.
3) Outside One’s Job Requirements: Political behaviour is outside the requirements of one’s specified job. It involves ways of accomplishing things that are not formally recognised practices or procedures
4) Influenced by the Behaviour of Others: Politics takes place when an individual recognises that the success of his goals is influenced by others’ behaviour. In such a case, politicking involves the eradication of the influential manoeuvres of a member of the organisation.
5) Irrational Decisions: From the organisation’s point of view political decisions are not rational. These decisions are based on injustice and are usually undertaken to attain more power.

Several factors are responsible for political behaviour. These factors are shown in the figure given below: 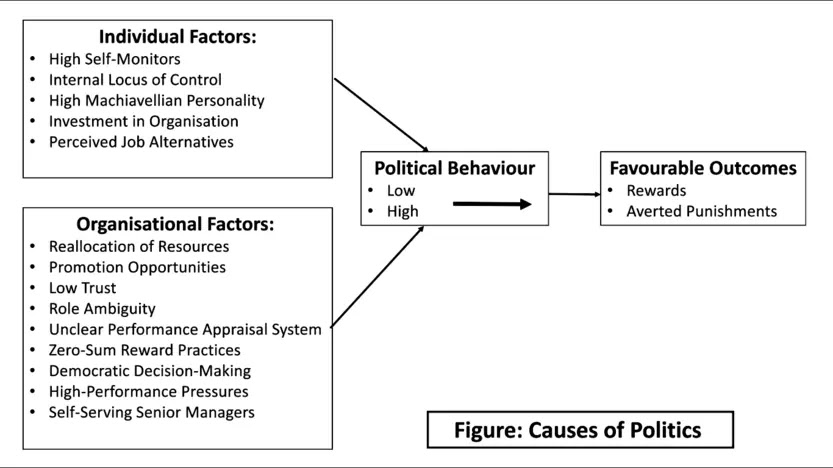 People’s responses to organisational politics can be as follows:
1) Reduced Job Satisfaction
There is very strong evidence that perceptions of organisational politics are negatively related to job satisfaction.
2) Increased Job Anxiety and Stress
The perception of politics also tends to increase job anxiety and stress. This seems to be due to the perception that, by not engaging in politics a person may be losing ground to others who are active politically or conversely because of the additional pressures people feel because of having entered into and competing in the political arena.
3) Increased Turnover
When there is excess politics, it can lead to employees quitting.
4) Reduced Employee Performance
There is preliminary evidence suggesting that politics leads to self. reported declines in employee performance. This may occur because according to employees’ perception political environments are unfair and it all demotivates them.
5) Decreased Overall Productivity
Politics lowers the output of an individual and eventually affects the productivity of the organisation, Individuals who play politics at the workplace pay less attention to their work. As a result of politics in the workplace, employees fail to achieve targets within the stipulated timeframe. Work gets delayed in such an institution.
6)Spoiled Ambience
Politics leads to a negative environment in the workplace. It spoils the relationships among individuals. An individual playing politics at the organisation is disliked by all.
7) Changes in Employee’s Attitude
Politics changes the attitude of the employees. Even serious employees lose interest in work and attend office just for the sake of it. Internal politics do not allow employees to give their full efforts at the workplace. No matter how much effort an employee puts in, it goes unnoticed in a politically driven organisation.
8) Demotivated Employees
Employees feel demotivated when they are not rewarded suitably or someone who has not worked hard gets the benefits due to mere politics. Discussions are necessary at the workplace to extract the best from the employees. Employees playing politics always look for an opportunity to tarnish the image of their fellow workers.