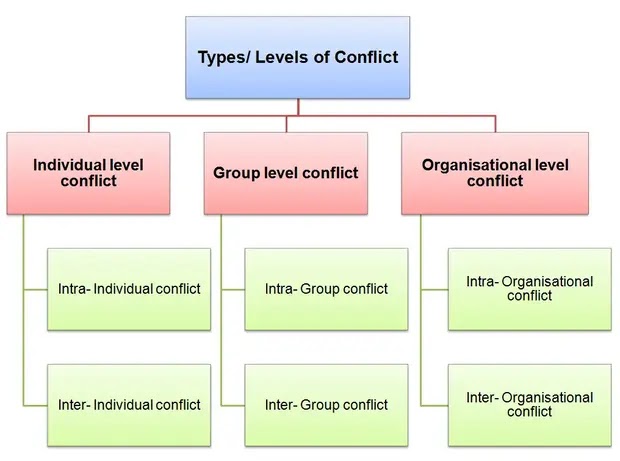 Individual Level Conflict
Human behaviour is needed motivated. A person joins any organisation basically to satisfy his varying needs. An employee faces a conflict within himself when he perceives that the organisation is not satisfying his needs by his perceived standards.

In the words of Keith Davis, “Organisations are the systems of medieval torture which suppress and subjugate their victim individual. He lives in helpless conformity, stripped of a challenge for psychological fulfilment.”
Likewise, Chris Argyris writes, “There is a lack of congruity between the needs of healthy individuals and the demands of the organisation” under such an unfavourable situation, an individual faces a great psychological conflict as he is neither in a position to leave the organisation, nor rectify it, nor he is satisfied.
As a result, he becomes tension-ridden and remains frustrated. Individual-level conflicts can be divided into two categories:
1) Intra-Individual / Intra-Personal Conflict
Intra-individual conflicts arise within a person and are psychological. Many times, the person remains conflict-ridden, but he fails to perceive it. However, they may be latent or overt. Such conflicts are commonly related to the goals someone wants to achieve or roles in a way he wants to achieve. Hence, intra-individual conflicts are of three types:
i) Conflict Due to Frustration: Frustration occurs when a motivated drive is blocked before a person reaches the desired goal. The barrier can be overt (outward, or physical) or covert (inward, or mental socio-psychological). The frustration model can be useful in the analysis not only of behaviour in general but also specific aspects of on-the-job behaviour.
The frustrated person adopts any of the four given defence mechanisms:

a) Aggression: It means the attack of the barriers; these barriers can be physical or symbolic.

b) Withdrawal: It means backing away from the barrier. It is related to the situation when an individual tries to save themselves front a conflict situation.
c) Fixation: It means the continuation of efforts to break the barrier.
d) Compromiser: It is related to the search for a new goal.
ii) Goal Conflict: Another common source of conflict for an individual is a goal that has both positive and negative features, or two or more competing goals. Whereas in frustration motives are blocked before the goal is reached, in goal conflict two or more motives block one another.
iii) Role Conflict: An individual performs several roles. Although all the roles, which he brings into the organisation, are relevant to his behaviour, in the study of organisational behaviour, however, h organisational role is most important. In the organisation, everyone is expected to behave in a particular manner while performing a detailed role. When expectations of a role are materially different or opposite from the behaviour anticipated by the individual in that role, he tends to be in role conflict because there is no way to fulfil one’s expectation without leaving the other.
2) Inter-Individual/Inter-Personal Conflict: Inter-personal conflicts arise between two individuals having competition for achieving scarce things, such as status, power, position, promotion or resources or they may pick up conflict due to their divergent opinions, attitudes or values. Disagreement among individuals in an organisation may arise for a variety of reasons:
i) Personal Differences: Everyone has a unique background because of his or her upbringing, cultural and family traditions, and socialisation processes. Because no one has the same education, family background, and values the differences can be a major source of conflict.
Disagreements stemming from the differences often become highly emotional and take on moral overtones. A disagreement about who is factually right easily turns into a bitter argument over who is morally correct.
ii) Information Deficiency: This source of conflict results from communication breakdown in the organisation. It may be that the two individuals in conflict are using different information or that one or both have misinformation. Unlike personal differences, this basis of conflict is not emotionally charged and once fixed, there is little resentment
iii) Role Incompatibility: This type of interpersonal conflict draws from both intra-individual role conflict and inters group conflict. Specifically, in today’s horizontal organisations, managers have functions and tasks that are highly interdependent. However, the individual roles of these managers may be incompatible.
iv) Environmental Stress: These types of conflict can be amplified by a stressful environment. In environments characterised by scarce or shrinking resources, downsizing, competitive pressures, or high degrees of uncertainty, conflict of all kinds will be more probable.
Group Level Conflict
Conflict may occur at the group level. A group includes two or more people who interact in such a way that each individual influences and is influenced by others. Groups exist in every organisation and they affect the behaviour of the people of the organisation. They not only affect the behaviour of their members, rather, but they also have an impact on other groups and the organisation as a whole. In this interaction process, there may be the following types of conflict:
1) Intra-Group Conflict: Intra-group (within the group itself) conflict may be thought of in terms of group characteristics and to some extent interpersonal conflict, especially if two persons are from the same group. A group is consisting of several persons whose interactions at a given time generate a system of values, norms, and sanctions appropriate to the nature of the task on which they are working, which has created a set of well-defined role and status relations, which are interdependent. Intra-group conflict may occur in three given situations:
i) When the group faces a novel problem of the task.
ii) Where now values are imported from the social environment into the group, and
iii) Where a person’s extra-group role comes into conflict with his intra-groop role. Intra-group conflict is visualised more when people come from different socio-economic backgrounds and have different political and religious views
2) Inter-Group Conflict: Inter-group (between groups) conflict arises out of the interaction of various groups Inter-group conflict can be highly competitive, especially for social groups with a long history of conflict contrast, intergroup competition can sometimes be relatively harmless, particularly in situations where he is a little history of conflict (eg, between students of different universities) leading to relatively harmless generalisations and mild competitive behaviours Inter-group conflict is commonly recognised audit racial, ethnic, religious, and political groups.
Inter-group conflict may be caused by the following factors:

i) Competition for Resources: Most organisations today have very limited resources Groups within the organisation compete for budget funds, space, supplies, personnel, and support services.

ii) Task Interdependence: If two groups in the organisation depend on one another in a mutual way or even a one-way direction (as in a sequential technological process), there tends to be more conflict than if groups are independent of one another. The more diverse the priorities, objectives, and personnel of the interdependent groups (for example, production & research), the more conflict there tends to be.

iii) Jurisdictional Ambiguity: This may involve overlapping responsibilities or “turf” problems. For example, conflict might occur when one group attempts to assume more control or take credit for activities, or up it’s part and any responsibility for undesirable activities
iv) Status Struggles: This conflict occurs when one group attempts to improve its status and another group views this as a threat to its place in the status hierarchy. One group may also feel it is being inequitably treated in comparison with another group of similar status in terms of job assignments, privileges, working conditions, rewards, or status symbols. Human resources departments justifiably often feel they are treated inequitably by marketing, finance, and operations departments.
v) Goal Incompatibility: It occurs when the goals of two or more groups are in direct opposition such that one group will achieve its goal while the other group(s) will be unable to meet the goal Goal incompatibility may be distinguished between real goal incompatibility and perceived goal incompatibility.
vi) Time Incompatibility: Workgroups perform different tasks, have different goals and interact with different customers such that groups will have different timeframes or deadlines in which they operate.
vii) Contentions Influence Tactics: Contentious influence tactics (eg, threats, demands, and other negative behaviours) may be used to attempt to influence others from another group creating cycles of retaliation and influencing the opinions of those within their group (e.g., creating bad reputations).
Organisational Level Conflict
In an organisational situation, conflict may manifest itself in several different modes. Such conflicts may be within the organisation itself (intra-organisational) or between various organisations (inter-organisational). Intra-organisational conflicts maybe again in various forms, for example, at the individual level and the group level. Since these are all parts of the organisation; the conflicts among them are of much concern to the organisation.
Organisational conflict can be of the following two types:
1) Intra-Organisational Conflict: The reasons for conflicts in an organisation are many but mainly three kinds of internal strains can be identified:
i) Horizontal Conflict: Horizontal conflict refers to the conflict between employees or departments at the same hierarchical level in an organisation. The source of conflict between departments consists of pressures toward sub-optimisation. Each department may sub-optimise by independently trying to achieve its own departmental goals.
For example, the production department may prefer long economical runs whereas the sales department may insist on quick delivery. Again, when two departments are functionally interdependent, breakdowns in the performance of one department can lead to serious conflicts.