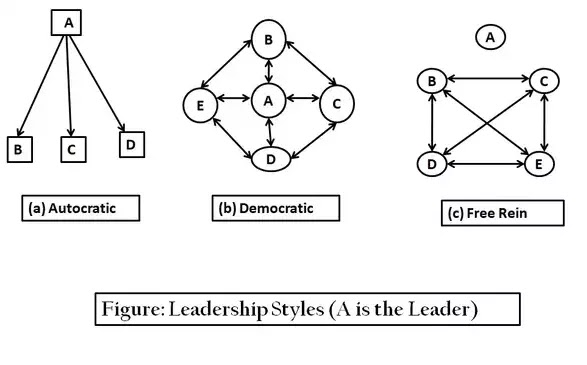 1) Autocratic Leadership Style:
An autocratic leader is often called a “dictator”. The autocratic leader gives commands, which must be followed by the subordinates. He prepares strategies and plans for the group without discussing them with them and even does not give full information about future plans, but he only tells the group what immediate steps they must take.
He gives personal praise or criticism to each member on his own initiative and remains detached from the group for the major part of the time. Thus, under this style, all decision-making power is centralised by the leader.
Leader adopting this style stresses his privilege to decide and order subordinates’ obligation to do what they are told to carry out. He does not give subordinates the freedom to influence their behaviour. He tolerates no deviation from the orders. His subordinates fully depend upon him and are unaware of the goals of the organisation.
The leader accepts and understands full responsibility decision-making for initiating action and for motivating, directing, and controlling his subordinates. This is because the autocratic leader may think that he is the only qualified and proficient person and that his subordinates’ are incapable or unwilling to guide themselves, or he may have other reasons for considering a strong position of supervision and control.
The autocratic style is efficient, needs little or no time to consult others during the decision-making process, and works well in developing situations when decisions must be made and acted on quickly and without question.
Advantages of autocratic leadership style
Some of the advantages of the autocratic leadership style are as follows:
i) Facilitates Fast Decision-Making: It can be used where there is the pressure of time. In times of crises or emergencies, decision-making is faster when only one person is involved in the process. In situations like these, there is limited time to consult people and call for their participation to make decisions.
ii) Increased Productivity: The “leader is watching” style motivates managers to work hard as the oversight that an autocratic manager exerts over a team improves their working speed and makes them less likely to slack. This is ideal for badly motivated employees who have less interest or concern in the speed or quality of work done.
iii) Reduces Stress: In the autocratic style, as the leader has significant responsibility for every task, managers will feel comforted, and reduce their stress levels to know that leaders have control over their fate.
iv) Helpful in Training New Employees: Autocratic leadership style is appropriate when the leader is training others who are new and untrained at the job to make decisions. Fresh or unskilled workers usually do not know which method to follow. The leader is a coach. He is competent and the employees are driven to learn new skills. The leader closely supervises the new employees, leading them through detailed orders and instructions.
v) Improved Logistics of Operations: Having one leader with heavy involvement in many areas makes it more likely that problems are spotted in advance and deadlines met.

The disadvantages of the autocratic leadership style are as follows:
i) Discourages Follower’s Development: It fails to develop leadership skills in the team members since the leader makes all decisions. This kind of leadership style discourages creativity, leadership and innovation.
ii) Increases Leader’s Workload: By taking on as much responsibility and involvement as possible, an autocratic leader naturally works at their full capacity, which can lead long term stress and health problems that could break working relationships with co-workers. This hyper-focus on work comes at the cost of good leadership development.
iii) Induces Fear and Resentment: People don’t like being bossed around and criticised far more often than praised, resulting in an atmosphere of fear and resentment.
iv) Leads to Frustration: This can frustrate workers as they might only receive feedback on their work when being told of a mistake they’ve made.
v) Exploits People: Some leaders use threats, and abuse of power when working with people to make faster decisions in the short term. Thus, this type of style of leadership is insensitive to other people’s feelings.
2) Democratic Leadership Style:
The participative leadership style decentralises managerial authority. The leader’s decision is taken after consultation with his followers and after they participate in the decision-making process. He sees to it that policies are worked out in group discussions and with the acceptance of the group. He makes it clear that praise or blame is a matter for the group and participates in the group as a member. Unlike an autocratic manager who controls through the authority he possesses, a participative manager exercises control mostly by using forces within the group.
The democratic leadership style, which is also participative by nature, is popular among leaders because it is people-centred. The participative leader establishes trust; hence, close supervision of the staff is not necessary. The democratic leadership style produces the most positive results in terms of such things as productivity, loyalty, enthusiasm, flexibility, people development, and freedom of expression. However, the leader makes it clear that if the staff cannot come to a decision, he retains the right to do so.
Advantages of Democratic Leadership Style
Some of the advantages of the democratic leadership style are as follows:
i) Increases Acceptance of Management’s Ideas: The leader works with his staff and they reach decisions by either agreement or consensus. Thus, it increases the acceptance of management’s ideas and the cooperation between management and employees.
ii) Effective Utilisation of Follower’s Knowledge: People’s abilities, knowledge and skills are effectively and efficiently utilised. Where this style is used, team spirit is observed and all members are committed to the work they perform. Trust is built, communication flows smoothly and the working atmosphere is relaxed.
iii) Increase Follower’s Commitment: Followers gain ownership and commitment to decisions and activities. This is because the leader solicits thinking and open discussion on issues by all members. The leader only makes decisions after getting relevant input from the group. It increases the morale of the employees.
iv) Fosters Professional Competence: This type of leadership style fosters professional competence. Supervision is minimal as individuals take the responsibility for their behaviour. The democratic leadership style encourages employee participation and professional growth.
v) Reduction of Friction and Office Politics: When leaders listen to their subordinates and use their ideas despite blatantly ignoring their ideas they can reduce organisational threats like tension, conflict, and backstabbing.

The disadvantages of the democratic leadership style are as follows:
i) Leads to Misinterpretation of Leader: Participation may be interpreted as a sign of inefficiency on the part of the leader. Subordinates may view the leader as incompetent to handle crises independently.
ii) It is Time-Consuming: Participative leadership is time-consuming. Quick decisions can not be taken. It is time-consuming because individuals expect and demand to be consulted on everything that occurs in the organisation and this consumes time. In times of crisis, this delay may be costly.
iii) Creates Lack of Responsibility: A democratic leader can also be seen as being so unsure of himself and his relationship with his followers. To him, everything seems to be a matter of group discussion and decision. When used for decision-making, the democratic style calls for a majority vote at times. The major disadvantage here is that nobody takes the responsibility for the results of the decision being taken.
iv) Results in Danger of Pseudo Participation: Many managers simply pretend to follow a democratic leadership style to score a point in the eyes of their subordinates. Employees are quick to realise when their ideas aren’t actually valued, and that the manager is merely following the procedure in asking for suggestions, but never actually implementing them. In other words, they’re simply exerting autocratic leadership in disguise.
3) Free Rein Leadership or Laissez-Faire Leadership Style:
The free rein style of leadership is also called Laissez-Faire. A free-rein leader does not lead but leaves the group completely to itself. He is represented by the director of the board who does not manage but gives all the responsibility of most of the work to his subordinates.
The free-rein leader avoids power. He depends largely upon the group to set its own goals and work out its own problems. Group members work themselves and give their own motivation. The leader exists as a contact person with outsiders to bring his group the resources and information it needs to fulfil its job.
Free rein leadership is also known as Laissez fair leadership. Free-rein leadership ignores the manager’s contribution almost in the same way as autocratic leadership neglects that of the group. It fails to give the group the advantages of the leader’s inspired motivation.
The leader effectively handles his leadership status, he entrusts all the responsibility and works to the group which he is supposed to lead, limiting his authority to maintain the contact of the group with people outside the group. This is also known as the permissive style of leadership, where the is least intervention by the leader, handing over the authority and letting the group operate entirely on its own.
Free rein style leadership is a management style in which leaders leave most decisions to their subordinates.
Under the free-rein leadership style, the manager assigned the tasks to employees and gives them free rein to choose the best way to complete them.

Advantages of a laissez-faire leadership style are:
i) Provides Freedom of Direction: When employees are motivated to drive towards success, a laisse Faire leadership style can give them the flexibility that they need to succeed (there is no interference from the leader).
ii) Reduces Work for Leader: With all responsibility deferred to the group there is less work for the leader to perform interacting with the group, and they can thus spend their time adding value to the organisation.
iii) Motivates Team: As the leader believes in faith and trust, individuals become more responsible. They are motivated to work and have supreme liberty of action. It is non-interference in the cases of other styles of leadership. This style is used when workers can analyse the situation and determine what needs to be done and how to do it.

Disadvantages of a laissez-faire leadership style are:
i) Increased Stress Levels for Employees: Employees can feel stressed if they are not secure enough in their own ability due to the lack of availability of their leader for positive reinforcement.
ii) Results in Lack of Ownership: The laissez-faire leader has no authority. He just observes what is going on in the organisation. In such an organisation there may be confusion if the leader stays isolated from the rest of the employees. There is nobody responsible to take the blame or praise in case of success or failure.
iii) Leads to Lack of Direction: The lack of direction in laissez-faire leadership, though, can result in demotivated team members. Team members can feel unsupported and forgotten by their leaders.
iv) Leads to Conflict among Followers: The freedom does not encourage good team functioning as individuals do as they please. Those people who are conscious of their duties become burdened with work. Working as individuals, the tendency is that their efforts are not organised, as the leader keeps leadership responsibility.
Moreover, skills and knowledge are not shared among the workers because of individualism and uncoordinated efforts. Sometimes group members end up neglecting everything themselves.